NORDBAHNHOF, VIENNA The proposal for the urbanization of the site of the Nordbahnhof, formerly the goods depot which supplied coal to the city of Vienna, between the Prater and the Danube, was drawn up at the request of the city council. DORIOS BENCH The Escofet, S.A. company, following a tradition from the «Modernismo», commissioned us to design a series of pieces for urban furniture, produced in concrete. The initiative seemed excellent, although we were aware of the difficulty. We had, for INTERNATIONAL URBAN PLANNING, STUTTGART, International Ideas Competition The city of Stuttgart organized a limited competition to invite schemes for the decentralization of activities in the densely occupied urban core by means of the remodelling and introduction of new building in the URIACH HOUSE A simple volumetry, large expanses of tiled roof, eaves that protect the house from sun and rain, porches, contrast between the exterior space and the introverted spaces of the courtyards, with pools of wáter set in them…, motifs 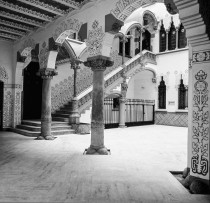